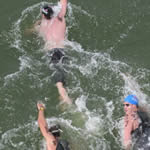 Cyclists, race car drivers and open water swimmers all know the benefits of drafting and positioning.

As swimmers take off in an open water race or triathlon and go from buoy to buoy, they create a conga line with seemingly everyone chasing after the person in front of them. Where ideally should you position yourself?
It helps to know a bit about water movement.

The Perfect Position
In a fact known by world-class swimmers, drafting between the ankles and hips is more beneficial that drafting directly behind the lead swimmer's feet for various reasons:


2.The bow wave cannot extend beyond the length of the swimmer who creates it. The bow wave lifts up at the end of the swimmer's body. The most efficient swimming is when a drafting swimmer cruises in that wave. The most efficient drafting is achieved if you cruise at the same speed in the wake of the lead swimmer off to the side—but away from the eddies caused by their kick.

3.In the middle of a race, when the kick of most swimmers is less than the end of the race when they are sprinting, the optimal drafting position is slightly different. At the end of the race when the kick increases, swimmers create swirls by their kick. The more swirls, the more drag. So if your opponent's kick increases, move up higher alongside their body to utilize their bow wave, but far enough away from the swirls and eddies caused by their kick.

4.Combine your speed with the speed of the lead swimmer. If they speed up, you speed up. If they slow down, you slow down. If you are directly behind them, lead swimmers make the water smoother, but you are not efficiently utilizing their bow wave.

6.Even if the water is clear and you can easily see the lead swimmer under the surface of the water, your head is in a sub-optimal position. The most optimal head position is when you are looking straight down. This creates a more streamlined and efficient body position, saving you energy and creating less drag.

7.When you swim parallel to the lead swimmer, you can effectively navigate off them when you breathe. The need to lift up your head to sight is significantly reduced and your head is positioned in the most streamlined position.

There are many other factors that come into play when drafting and positioning as world-class athletes do, but these basic factors are enough to get started.

+ "We limit what we can do by believing our limits are real and unmoving. These limits are self-imposed and simply need to be challenged. What if you are far greater than you think?" ~~Coach Skip Slade

+ "I prepare myself to suffer; to suffer more than I've suffered all year." ~~ Belinda Granger, Professional triathlete before 2008 Ironman Hawaii World Championship

+ "It is not the critic who counts; not the man who points out how the strong man stumbles, or where the doer of deeds could have done them better. The credit belongs to the man who is actually in the arena, whose face is marred by dust and sweat and blood, who strives valiantly; who errs and comes up short again and again; because there is not effort without error and shortcomings; but who does actually strive to do the deed; who knows the great enthusiasm, the great devotion, who spends himself in a worthy cause, who at the best knows in the end the triumph of high achievement and who at the worst, if he fails, at least he fails while daring greatly. So that his place shall never be with those cold and timid souls who know neither victory nor defeat." ~~Theodore Roosevelt